The Zombie Busters Squad has been summoned for fighting the zombie apocalypse on Earth! Take command of three elite heroes with unique abilities and powers.
Game Story: It’s 2280 A.D. and the Earth is suddenly infested with a deadly virus that’s caused the horrible zombie apocalypse! A deadly black virus was planted by an unknown enemy and created havoc on Earth. Team up for a deadly battle against hordes of brutal zombies!
The only thing that the Commander wants is to embark upon this outlandish journey and annihilate them from the face of this planet. Zombie Busters Squad is called for help. Swat team has failed to control this apocalypse and Zombie Buster Squad is the only hope from invasion and to save the world from an apocalypse.
It’s a deadly clash between Zombie Buster Squad and evils. Play well and make this a bloody nightmare for the undead!
Introducing the Squad:
JANE: Ninja, who slice the zombie hordes with her mighty sword. Slash, chop and slaughter your way through hordes of zombies, the master of melee combat.
JOHN: A military-trained cyborg soldier. Is shooting your way of play? Then this ROBO cum Terminator is the answer! Win over the outbreak with the only real shooter.
Dr. DAN: A brilliant yet wacky scientist who’ll go to any lengths to make his invention right using his chemical weapon technologies. Center the attack on the dead and demented with Dr. Dan, the scientific overkill expert.
Choose your style of play, whenever you want! Shoot, chop or burst your way to destroy zombies invasion – Try the way you like it.
★ Experience Unique Zombies ★
Mr. Candy Man: Riding a candy cart, he rings his bell to call more zombies and then throws candies at humans.
Skating zombie: He rides his skateboard and attacks humans in his way.
Rugby Man: He always carries lots of footballs with him and throws at humans.
Mr. Balloon Man: He carries his balloon cart and fills balloons with gas, tying them with bombs.
Terrorist zombies: She is a suicide bomber zombie. Careful, she is dangerous.
And many more…
Don’t confuse these brain hungry monsters as being stupid, they are very nasty creatures. They target humans or rather anything human-like instantly!
★ Challenging Missions to Accomplish ★
• Challenge yourself by racing against time to survive the tsunami of zombie.
• Rescue the innocent from all possible threats to safety position located inside the map.
• Protect your headquarters and other buildings in town from serious damage.
• Escort the survivors from the exodus, away from the threat and tension of the zombie wave.
★ WEAPON& POWERUPS ★
- Multiple power ups equipped by each hero such as ground cutter, Jetpack, slicer, Grenade launcher and many more.
- Keep upgrading to unlock the deadliest guns and to be a true killer
- Explore modern battle via various strong guns.
★ GAME FEATURES ★
• UNIQUE GAMEPLAY: Strategies your gameplay and accordingly choose your hero
• UNLEASH THE POWER:15 different power-ups to tackle zombies
• TEST YOUR SKILLS on the dreadful hard and survival missions
• PLENTY OF UPGRADES: Upgrade weapons for glory
• EASY CONTROLS: Smooth, intuitive control for Deadly combat
• STUNNING VISUALS: Excellent graphics and with comic-style art
• SPECTACULAR SOUND EFFECTS: Each weapon and power ups has exclusive sound effect to create thrilling ambiance.
• OPTIMIZED FOR TABLETS AND ANDROID PHONES
But that’s not all, there’s much more zombie action fun tucked inside - so go ahead, download the addicting Zombie Busters Squad today. It’s an action packed strategy game. Game is also favorite for all ages, from those who grew up with classic action arcade games. The fun never dies!
Keep your diary loaded with the targets and finish them one by one.
Download today to stem a zombie attack on your Android device and reveal the mystery! And don't forget to rate us! Also do tell your friends about this awesome game.
Game available in: English, French, Spanish, Russian, German, Chinese and Thai. 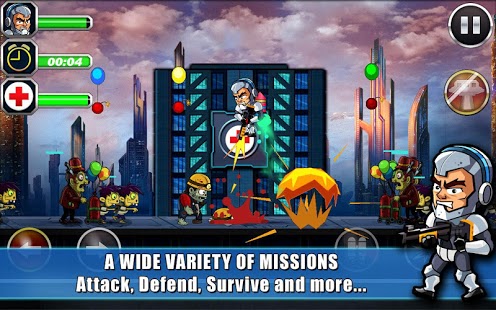 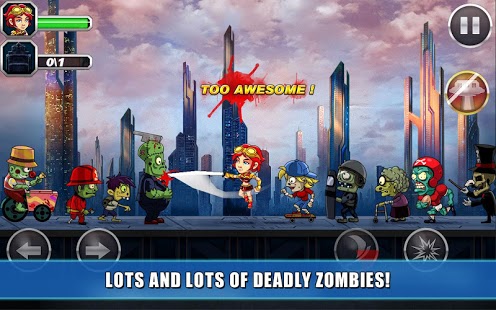 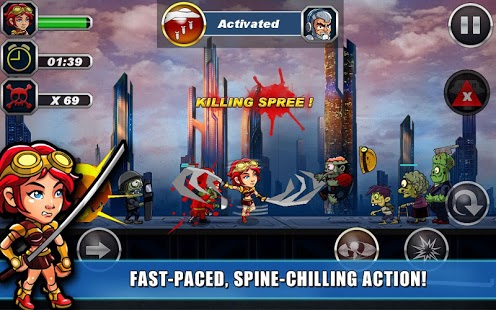