HIlarious graphic adventure inspired by our childhood’s point and click games
★ Year 2022: Society has truly changed during the last decade. The good old times have vanished. Discover this unusual and hilarious graphic adventure inspired by our childhood’s point-and-click classic adventure games ★
The Great Fusion is a third person graphic adventure set in the year 2022. Rich people are richer and poor people are even poorer. Laws are absurd, the Copyright crusaders prosecute free culture and large corporations are managed by incompetents. And that’s science fiction, righ?
- Available on iOS and Android
- Entertaining story with hilarious dialogs
- Current affairs remarks with nods to social criticism
- Hand-drawn artwork
- Original soundtrack
- User-friendly interface
- Optimised for touch devices
- Multilanguage : English, Spanish, French, Italian. (German coming soon)
★About the game★
Max, a young and brilliant programmer, will fall into poverty and will fight to make a living trying to avoid falling for his own ignorance, experiencing thousands of crazy situations, amidst countless nods to classic graphic adventures and films from pop culture.
As the whole world appeared to be unified, borders were created to separate the rich area from the poor one. The age of unification has come, in what is known as "The Great Fusion". Put your anti-hero cape on and fight for what’s yours with Max’s help in this unusual and hilarious adventure.
This is the first science fiction adventure as real as life itself. An adventure that merges the best of classic graphic adventure games with the fun look and feel of current comics. Hilarious dialogs, videos of kittens, Quentin, Woody, robots, security officers in shorts, a lady with a rat-dog and many more characters who will cross your path. Run for your lives!

★Tired of first-person shooters?★
We all know zombies are cool, and killing them is even cooler. But the creators of "The Great Fusion" –a bunch of 28 year-old guys in robes- wanted to make a different game, which could recapture many of those good old times from the classics of the genre. Those witty conversations which help solving the continuous puzzles popping up at every turn...
It was a unique and unforgettable experience which can be rarely found in games today. Our priority has always been to make an alternative game with an intuitive interface which would allow us to enter Max’s world. We won’t have to be great heroes, we will not save or take over the World, but we will recreate one of the potential futures our society is unfortunately heading.

★Help us spreading the word★
If you like the game, help us by sharing it.
- Make some noice: tell your friends or anyone you think migh be interested in “The Great Fusion”.
- Use the share buttons in social media if you feel like it.
- A few sincere words: we are always trying to improve. We are delighted to receive your opinions and we will take them into account for future projects. 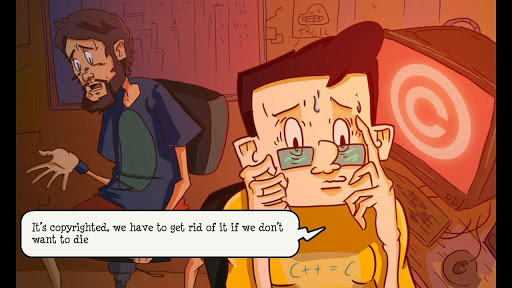