Limited Time Special Offer! Only 1.39c. Get it now while its this price.
Fast paced Formula 1 racing game at its finest. Play this old school top view racing F1 game. Win a Formula Micro Grand Prix, Or even better, score enough points in career mode to become the Formula Micro GP Champion! Includes practice sessions, qualifying sessions for grid places and of course, Racing!
All with dynamic tyre wear, pitstops, kers (turbo) to get ahead of your opponents on the straights.
Play career mode to get offered contracts by different teams. the better you perform the more likely you will get a contract from the top faster teams.
Features:
8 Cars / Teams to choose from all with their own speed and handling
8 Tracks / Circuits to race on including
- Australia Grand Prix
- Spain Grand Prix
- Great Britain Grand Prix
- Germany Grand Prix
- Italy Grand Prix
- Singapore (Night Race) Grand Prix
- Japan Grand Prix
- Brazil Grand Prix
3 modes to play
Practice - practice your timing on any tracks.
Single Race - Run through practice and qualify sessions to score the best time for your position on the grid. then race for the win.
Career Mode - Get more contract offers each season, the better you perform, the more the top teams will want you. Get the best position in qualifying sessions to start at the front in the race. be at the top of the championship points table at the end of the season to become the Formula Micor GP Champion!
Unlike most top view racing games, your Formula Micro GP has very simple controls, which makes the game a lot more fun to play.
Special Features;
* Dynamic tyre wear
If your car is not handling as good as you would like, head into the pits to put a fresh set of tyres on.
* KERS (Turbo)
Hit the KERS button to get extra speed on the straights to get ahead of your opponents.
* 8 Different tracks to race
* 8 Cars to choose from
* Practice Mode
* Single Race Mode
* Championship Mode
* Live timing
* Open feint leader boards
"The best top view racing game on Mobile! Hands down - the best F1 game racing action!"
"Cool Formula 1 game! Racing these little cars on a mobile has never been so much fun!"
"Awesome Formula One game, gotta try it!"
A must for any formula1 fan or racing game fans. 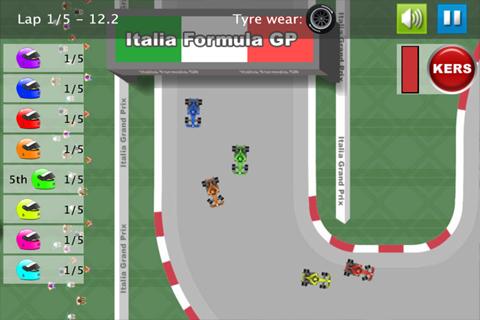