Many years after nuclear bombs fell to the ground, the civilization struggles to survive. You heard rumors about tons of the best and cool loot in old abandoned subway tunnels. You knew that subway doesn't sound cool and that isn't the best idea to go there by yourself. But free loot is free loot. You heard that in those subways lives some mutated monster too. But all you can see is how you drag the loot back home. So you went to your second hideout for supplies. On the way there you found a cool old taxi car, and remembered fun days when you would wake up, drink fresh cup of coffee and go to work having a fun chat in a taxi car. You open your eyes, the sun is still shining.....
Taxi cars, you would like to use one right now, so many miles on foot isn't cool or fun. You take the free fuel and move on. After many hours, you finally get to your spot you feel like it's been a race between you and the sun, but at least fuel you drag will be helpful. You take off old dusted cover from cool police car that you have been working on, cops don't need that anymore. Dust floats in the air, the light rays leak through the gaps of an old wooden barn. You see a top notch piece of the oldschool cool cars. Memory takes you one more time back to the fun and peaceful times, when you bought your best race car. It was a cool monster on the road, the sound of its monster racing engine was so relaxing....
You refueled the car, checked that everything under the hood was fine. The best thing about this police car is that this car dates street wars. Back then called “fighting games” - times of riots, when crime took over the streets and this police car was used to race and take down the best criminals, it's was hard times for cops. The thing about police cars from fighting games is that they have installed monster guns to take down top mafia drivers by cops. Nobody wants fighting games to come back but rumors has it that fighting games still take place somewhere. But cops don't exist any more. With checked and reloaded guns you get into the car, put the key into ignition and take a big, deep breath. With firmly moves you turn on the engine. Smile appears on your face.
It's a fun time! Fun in an old abandoned subway!
On the road a fun idea comes to your mind - “let's find out what this baby can do”. You put pedal to the metal to reach top speed and drag for sometime, and there are no cops to stop you. Wind flows through the window, you feel a pleasant breeze, feel free one more time. You past a taxi that you took fuel from and on the road, found taxi company where you refueled again.
After driving to the subway, you searched for best entrance and found out bomb crater that you can easily go through with your police car. When you drive down, the echo sound of engine becomes noisy. It didn't sound like a monster. You drive slowly, feeling that something is wrong. You turn off the lights. Strange sound is coming in front of you, suddenly the lights come on in the tunnel! You realize what is going on, RAIDERS! Entrance behind you was blown up, so only way is ahead! You know you will need to race...
This is going to be a fun, drag - out fight!
Top thing is to stay alive!
Don't drag your feet and do it!
In this cool race game you will be driving an old school modified police car, upgraded with mini guns.Point of this best racing game is to stay alive as long as you can by simply avoiding enemies or shooting them down! Try to save ammo, in the post apocalyptic world ammo is very precious (you can loot some for free in game). We added various modes of gameplay so the game won't ever get boring.
Be at the top of the Leaderboards!
Fun Game for free! 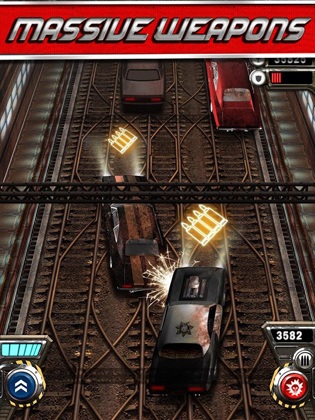 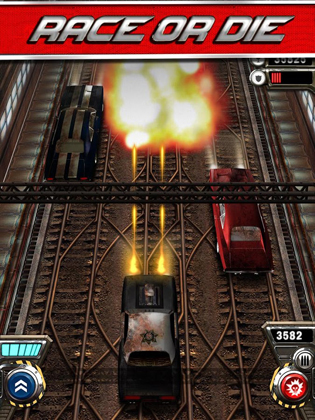 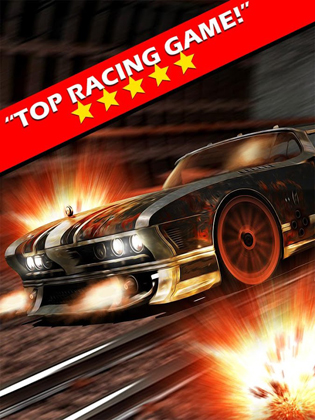