The best action game in 2015!
If you like shooting survival games and like to simulate sniper shooting that fight in amazon jungle for glory and duty, then Army Gunner: kill sniper Shooting is the one you should be playing.
In his role as an elite russian commando shooter, you have given a special mission codenamed Black ops.
Command an elite russian army of legendary heroes, contract elite soldiers, and devastating russian army truck in this combat action games. Customize your modern weapons and train army elite forces to dominate your enemies target.
to combat direct and clear a destroy enemy base and terrorists with limited shoot weapons and few russian army force soldiers.
You must do your duty, the call from the terrorists was thrown. Its a killer type action games, its really a swat commando swat VS Terriost shooter game.
Secret operation black ops be carried out commando killer, sniper in amazon jungle in dark night a good weather at a secret russian army soldier's camp near the Amazon Jungle border.
First of the contract assassins is fighting his own battle in the russian cities while the other brother in arms is busy eliminating enemies in amazon jungle.
Lock your hand dead on the trigger, you'll gonna need it. Your professional killer duty your obligation to infiltrate the enemy base on the banks of the Amazon, shoot to kill all the soldiers of the enemy lonely army, to strike at the main force of the enemy army, shoot and kill
You duty to fight for glory, are the real sniper ( killer ) is your target russian army of terrorists. Kill or be killed! Justice the main target, which you must do in this world war.
Clash of the terrorist clans, and the troops who take revenge and kill civilians. Destroy all enemy vehicles, fuel tanks, buildings, barracks, sniper positions, Russian military vehicles, russian weapons depots.
Now begins the real war adventure with a lot of russian sniper conter strike, fights for justice terrorists and shooting all the enemy targets !!!
Army Gunner: kill sniper this game you are a survivor commando sniper from an russian army - glory commandos! Frontline in the war zone appeared to be the target to killing, shoot the terrorists as they shoot in you and your commando russian soldier.
You won the war fulfilled the duty to his country and get much glory. Clash of russian armies inevitably, win the Battle and win the war and restore justice in the world.
The game has such levels: amazon jungle run, desert, and russian city.Shooter rivals, against time and above all against death, to survive the deadly battle and win the commander sniper contract.
Simple mini shooting tools like grenades, swat weapon , crossbow, sniper rifle, ammo, gun, russian ak-47, trigger will become your best friends. The call of war will be your only duty.
Shoot at attack of terrorists and become a heroes in the battle! The frontline has become a place of permanent warfare between army commando forces and the terrorist killers.
Shooting on target and become top prime contract sniper killer in the world war with the terrorist enemy. The Duty survive the war, justice, to doom glory to save his commando russian army!
You will like this game if you have played Army Gunner, frontline, combat, commando adventure shooting games and contract kill from google play.
If you love (fps) first person shooters, action games and shooting games, this game is made especially for you! Play action games 2015 - FREE!
Army Gunner Features:
- 3d FPS (First Person Shooter game)!
- Real Battlefield environment for shooting!
- Real sniper shooting sound effects!
- Player has russian sniper rifle (AK-47) to shoot and kill enemy.
- Basic controls and gameplay (tap screen to shoot)!
- Commando shooting action war!
- Strategic game!
- Survival and shooting! 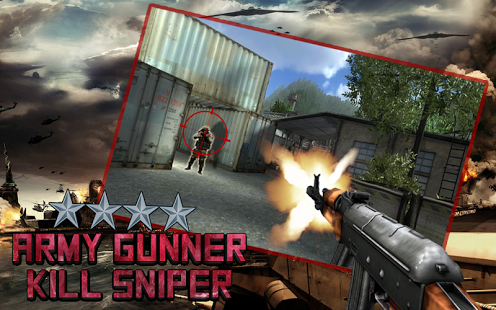 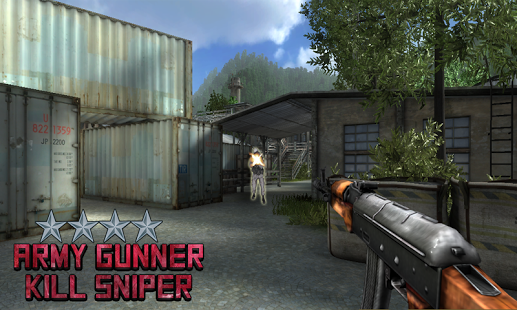 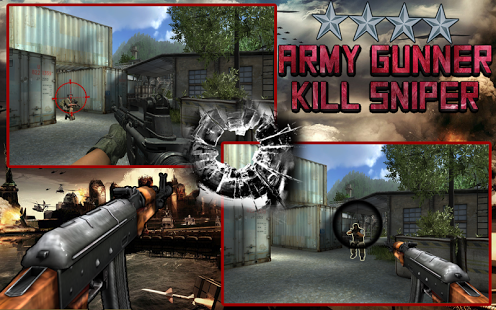