Frankie Pain l Version: 1.3.5 | Size: 45.24MB
Developers: SkillPod Media | Language:English
Frankie Pain is a "Run and Gun" style puzzle game with awesome graphics.
Frankie Pain is a "Run and Gun" style puzzle game with mind blowing graphics and 13 pulse-pounding levels of aliens, weird creatures and awesome weapons. Fight your way through each level, picking up power-ups and special achievements along the way, to win the game and save the Earth!
Meet Frankie Pain. He's a highly trained, combat savvy mercenary who sells his skills to the highest bidder. In this case, the highest bidder is the military. Frankie's mission is to test a new weapon for the government, but there's a catch. The weapon is to be battle tested against none other than his old nemesis, General Am'Elam, the leader of the alien invasion on Earth.
The military is hoping Frankie can save the Earth, but Frankie has other plans. This enemy has humiliated him in the past; forcing him to run and hide. Now Frankie's only goal is sweet revenge. If the Earth gets saved from destruction in the process, well that's just fine, too, but Am'Elam is going down no matter what.
Frankie Pain Features Include:
* One brave but slightly selfish Anti-Hero
* 13 climb, run, duck, shoot and cry levels including 4 Boss Battles
* 9 additional weapons that are activated as in-game pick-ups
* 9 creature allies that might just make the difference between victory and defeat! These are activated through in-game pick-ups.
* Best of all, you can finish the game without spending a cent
Frankie Pain's only motivation to fight is cash payment and revenge. He's no hero type, so it's up to you to make sure he accomplishes the right objective. Help Pain run, duck, climb and shoot his way through all 13 levels of play. Watch out for the alien bosses! There are 4 of them, and they're tough to beat.
Don't worry, you'll have some help. The Professor is a beautiful super-genius, and she also happens to be the military scientist who supplies you and Frankie with some of the most powerful weapons the world has ever known. There are also a few special power-ups to grab along the way. These can help get you through the tough spots, so keep your eyes open!
The enemy is formidable and the task is deadly, but you're up to the challenge. Download Frankie Pain now and save the world from alien destruction!
Keywords: gun and run, puzzle slider, shoot em up, shooting game, run and gun, side scroller game, action game, alien attack, space shooter, space ship, puzzle shooter, 3d shooting, 3d game, multi path stages, sci fi, sci-fi game 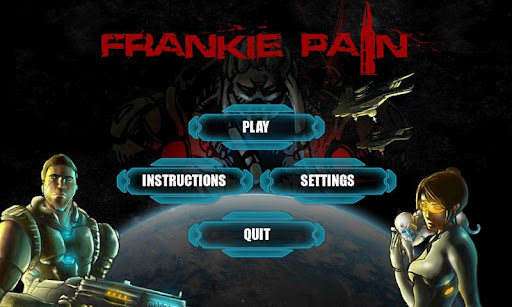