Get Pixel Gun 3D for free! Limited offer just for a couple of days!
Download the new HUGE halloween update! Try Pixel Gun 3D in MULTIPLAYER MODE with Cooperative and Deathmatch!
Now you have a perfect chance to battle with your friends, classmates and colleagues or anyone else around the world! You can create and customize your character using a special skins maker and then show off on the battlefield!
COOL MULTIPLAYER FEATURES:
- Awesome guns & melee weapons! Redstone Cannon, Glock, AK47, M16, Desert Eagle, Pistol, Uzi, Shotgun and a lot of new powerful weapons. Try to find them all!
- New HUGE maps: Silent Hill School, Golden Gate Bridge, Alcatraz Prison, Slender Man Forest, Winter Wonderland, Plants Utopia, Secret Fortress, Isle of Zombies, Deadly Creeper Pyramids, Horror Hospital , Black End World , Dawn in the Dead Nether City & many others! Special maps for parkour and jump fans!
Also New Counter Strike like maps De Dust!
- Hardcore bounty gameplay!
- Worldwide & Local Deathmatch Multiplayer
- Cooperative mode. Try co-op missions and destroy zombies with your friends!
- Awesome sound effects and songs! Cool graphics and physics!
Also you can try EXTREME SURVIVAL CAMPAIGN!
In survival mode your pixel hero appears in the Pixel Block World, full of zombies and enemies walking all over… Don't let the seeds of fear grow up in your head! I need to destroy all the enemies and survive!
Numbers of enemies constantly increase and after a short game time you'll have hordes of zombies attacking you from all sides, so that you cannot relax, you are not on the trip... you are like in the terraria full of zombies. When the dead come close you can dodge their attacks and shoot like a hunter or run away. It is a modern battlefield with the pack of textures of zombies. Guide your hero!
You need to choose the gun and shoot em down, imagine you are in the ops. Destroy all the zombies from your road on the first map to open the portal to the next fields! Craft your battle in this extreme survival game vs. the enemies! You left 4 dead in deadly arena and have only one mission: make a counter strike for the enemy attack! No cheats! Only hardcore gameplay! Free your mind...Try 2 survive!
Check out this cool FPS shooter with different mods, like survival, time trial and multiplayer mod. All of them work ok several servers, that’s why they work perfect!
If you are a fan of Minecraft Pocket Edition ( pe ), Survivalcraft or Cops N Robbers Mini Game - you need to try this awesome shooter!
Thank you for all the comments, we really appreciate it.
(It is a full version of the game, not a demo or lite one) 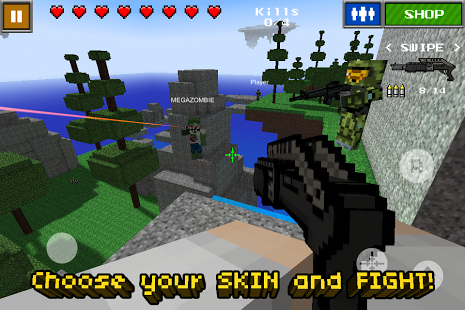 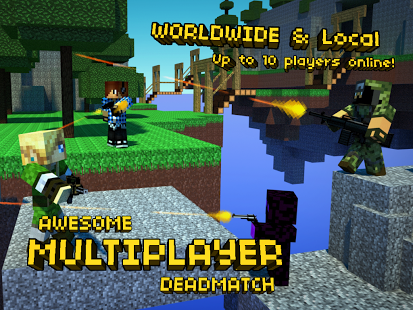 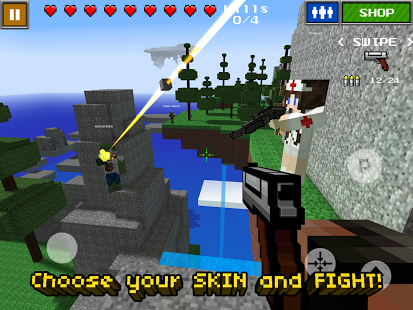