"World War II: TCG" is a free-to-play collectible card game based on the events of World War II. Create your own Army Decks with Tanks, Infantry or Aircrafts and increase your firepower with powerful weapons and strategic orders!
-= FEATURES =-
- Play the First World War 2 TCG game
- Single player fictional campaign (more than 100 missions)
- Online / Offline PvP Mode
- Deck builder
- 4 Factions and over 200 cards
- Strategic and dynamic gameplay
- Challenge your Facebook friends
- Become the ultimate General!
- A Strategic Card Wargame
World War II: TCG has a single player mode consists of 120 ww2 missions starting as a soldier and progressing through different battlefields and distributed in 10 campaigns based on historical military events from ww2.
There are three major types of cards in WWII TCG - Units, Items and Orders. Every card is based on historical ww2 units and weapons (e.g.: American Soldier...)
The resource system is different from other card games, and can be similar to a wargame, you have 3 action points that you can use to play cards. This mechanic gives a wargame atmosphere and creates different layers of strategy where you have plenty options from turn one.
One of the mechanics of "WWII: TCG" is promoting units. You can use your resources to promote the unit to be more powerful, the card starts as a simple soldier and will gain more stats and abilities while promoting.
WWII: TCG has a cross-platform multiplayer online mode where you can fight against other players on the battlefield.
Download this free to play card wargame and enjoy playing against other generals!
Future Features:
- New ww2 Army: British Army
- New Battlefield
- New Cards: WWII Heroes
- Historical Missions
- Animated Cards
- Draft Mode
Keys:
-Fight on Hundreds of Unique Missions!
-Play on an exclusive battlefield through different campaigns!
-Build your own army decks from the WWII!
-As a soldier play online against other enemies!
-The historical strategic card wargame! 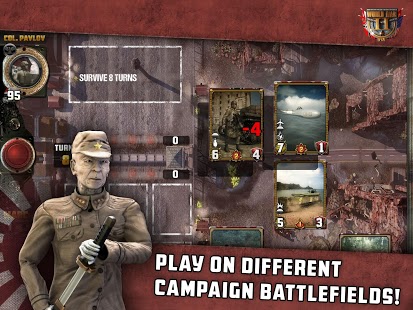