So many years have past since orcs were first introduced to the fantasy realms. Orcs and humans never got along and well... they still don't. They fight whenever they see eachother and honestly, I don’t see this brawl ending anytime soon. Although… now is your time to shine and join the onslaught. Pick up your sword and shield or battle axe and choose your favourite side in Knights vs Orcs. Let the slaughter begin!
☆☆☆The Game☆☆☆
In a way this game is about tower defense. Whether you play as a Paladin or as an Orcish Warlord, you will reign supreme by defending your headquarters and destroying the enemy base. You can build a minion army by collecting resources and upgrading (tech) to new tiers. Minions have strengths and weaknesses, based on the rock-paper-scissors principle. For example the standard orc troops are relatively slow, but can take a punch. Knights are small but fast. Your units will move from your nerve center to the enemy headquarters and slaughter everything in their path (or die tryin. Usually that...)
☆☆☆The Imperial Legion☆☆☆
The Imperial Legion is the first faction you will unlock and is let by the Paladin. This army is a mix between heavy siege weapons, magic and light infantry. Spend your resources well and defeat the enemy by being quick and cunning. Your army consists of the following units:
> Basic Knight armed with sword and shield. They slaughter all in big groups.
> Ranger/Archer armed with a rifle to engage at a safe distance. Very strong vs slow, heavy targets
> Grenadier/Alchemist/Witch armed with bombs and flasks. Massive area of effect (aoe) damage, but can
> Basic Siege Engine. Fast buggy made of wood. Heavy close combat minion.
> Sorcerer armed with magic staff and the ability to convert enemy troops. Faith is a weapon!
The Imperial Legion is supported by the following special powers:
> Off map reinforcements
> Siege Knight
> Slaughter Tractor
> Steam Bomber
☆☆☆The Orcish Horde☆☆☆
Unlike the humans, do orcs rely on pure strength. They have more faith in the reach of their axe than magic and all that nonsense. The horde focusses on strong, slow units. Their strength lies in the ability to slowly push the enemy into their own HQ. Orcish warlords can count on the following minions:
> Basic Orc equipped with an waraxe and leather armour. Slow but deadly.
> War hound. 1 tail, 4 legs, 5 eyes and countless razor sharp teeth!
> Berserker armed with a spiked club. This wild guy jumps around and hits like a truck.
> Gargoyle/imp. This little minion is literally death from above. He enters the battlefield with a bang!
> Ogre. Big, strong and brains the size of a peanut. You really want those guys on your side. Ogres gain the power of the elements later in the game (fire ogres and frost ogres).
The Orcish Horde is supported by the following special powers:
> Off map reinforcements
> Siege Orc
> Spitting Beast
> Meteorites
☆☆☆2D Artwork☆☆☆
Enjoy the detailed 2D onslaught. Some minions will change appearances per map and their abilities may vary. This gives a lot of visual ‘depth’ and will keep you engaged. The enemy army will do the same, so it’s fun to adapt your strategy accordingly. A normal ogre is different from a fiery ogre for example…
☆☆☆Advanced Battles☆☆☆
Choose your minions carefully. Your resources income is limited, so better seize opportunities and counter enemy champions. Use special powers wisely, because they can slaughter an entire army. Games usually last from 2 - 10 minutes (speed adjustable).
What’s your legacy? Wax your axe and join the onslaught. At times you’ll need nerves of steel. Sometimes you just need more steel. Or meteorites. Or witches. Or resources. You can never have enough resources.
Please give us some support by rating our game on Google Play or following us on:
Facebook - https://www.facebook.com/VascoGames
Twitter - https://twitter.com/VascoGames 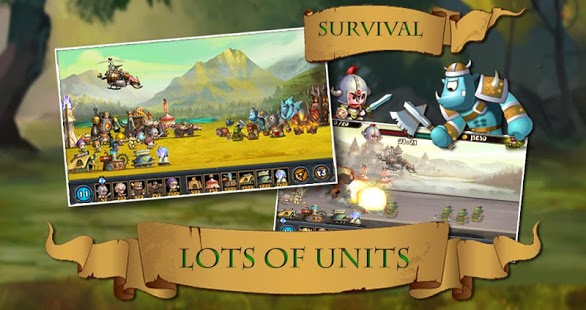 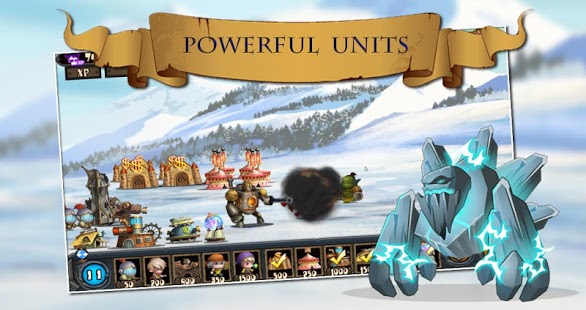 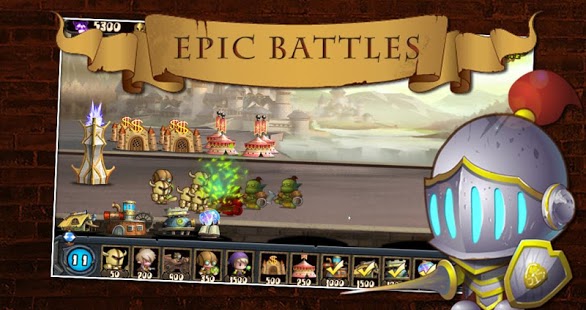