You are in the command of the Confederate armies during the American Civil War. The object of the game is to conquer the Union or at least hold on to as much area as possible until the year 1866. To have a chance to seize the top spot in the Hall of Fame you need to skillfully encircle scores of Union units, while trying to deal with the meager Confederate resources.
FEATURES:
+ Two game modes:
(1) NORMAL MODE: All the resources go to the resource pool automatically (quick & easy).
(2) SUPPLY MODE: You manually transport ammo to attacking units, and gold to major cities (requires more planning).
+ Competitive: Measure your skills against others fighting for the Hall of Fame top spots.
+ Long-lasting: Thanks to in-built variation and the game's smart AI technology, each game provides a unique war gaming experience.
+ Experienced units learn new skills, like improved attack or defence performance, ability to cross rivers without losing move points.
+ Challenging: Crush your enemy quickly and earn the bragging rights on the forum.
+ Historical accuracy: Campaign mirrors the historical setup.
+ Supports casual play: Easy to pick up, leave off, continue later.
+ Settings: Various options are available to alter the look of the gaming experience: Switch between terrain themes, change difficulty level, choose icon set for units (NATO or REAL), decide what is drawn on the map, change font and hexagon sizes.
+ Inexpensive: An entire war for the price of a coffee!
+ Tablet friendly strategy game: Automatically scales the map for any physical screen size/resolution from small smartphones to HD tablets, while settings allow you to fine tune hexagon and font sizes.
In order to be a victorious general, you must learn to coordinate your attacks in two ways. First, as adjacent units give support to an attacking unit, keep your units in groups in order to gain local superiority. Secondly, it is rarely the best idea to use brute force when it is possible to encircle the enemy and cut off its supply lines instead.
The full version of American Civil War can be purchased here: http://bit.ly/xBU8RX
Answer the call of duty and join Conflict series on Facebook or Google Plus!
+ http://on.fb.me/wsC2QV (FB)
+ http://bit.ly/GHHGU1 (G+)
Join your fellow strategy gamers in turning the tide of the American Civil War!
To see all the campaigns and scenarios in the Conflicts strategy game series visit: http://bit.ly/GRhzqH
Conflict-Series has offered highly rated strategy games on Android since 2011. Thank you for all the well thought-out suggestions over the years which have allowed campaigns to improve at a much higher rate than what any indie developer could dream of. if you have any feedback about Conflict-Series please use email, this way we can have a constructive back and forth conversion without all the limits set by the comment system. In addition, because I have huge number of projects, and their free versions, available on multiple stores, it’s just not very smart to spend handful of hours each day going through hundreds and hundreds of pages spread all over the Internet to see if somebody has posted a question somewhere -- just send me an email and I will answer to it as soon as I'm online. Thanks for understanding! 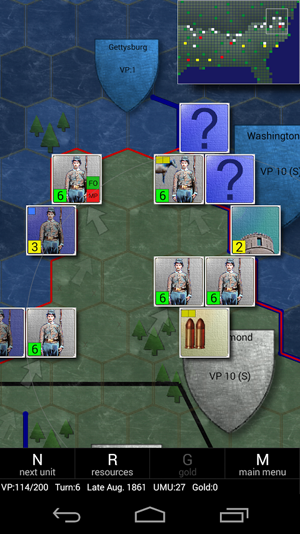 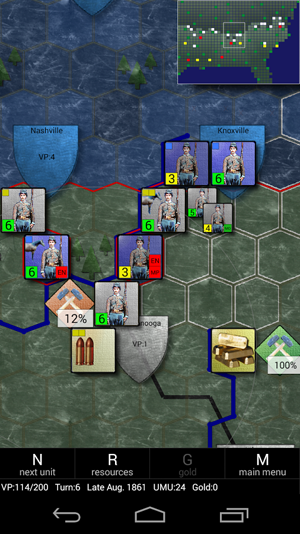