Our world has been under attack by ISIS terrorists. Come to a virtual world where you are a competent SWAT & sniper army. You are assigned a dangerous assault mission to blast away the gang of ISIS Terrorist with anti-terrorist war guns, steamy explosives, under cover agents, marines, sharp shooters and specialized military snipers at the enemy's frontier. In every mission, you have to dare step into the enemy's homeland, kill all the soldiers, destroy their arsenal and clear the territory. It takes real brave to cross the frontier to step into the enemy's territory for fulfilling the mission assigned to assassin all commandos. The target is near to impossible but not for a professional army shooter. Muster up your courage, peak your bravery, shooter have to be a frontline commander, aim all the soldiers and kill them for the sake of saving the world.
The first commando mission of ISIS Alpha Frontier. We have to destroy the swamp basecamp of Terrorists group having guns and ammunition storage at the base. Encounter the enemies with armor, Ak-47, sniper gun and new destructive weapons. You are the brave Assassin commando from the army force. Aim to shoot the head shots of your rival, strive hard so that no ferocious terrorist can run away. With every targeted gun shots you would get in practice with your targets. Accurate and precise aim practice will lead to more accuracy and eliminate terrorism in frontier shooting showdown. Keep in mind; he is the vicious terrorist you are going to swat & kill. More advanced features of the crusade against terror allow your choice of ammo, like shotguns, Ak-47, and machine-guns from different places during action. Travel deep into enemy territory to locate and eliminate hidden targets. Stare down your rifle scope, zoom in to find and identify the target. Take a breath...and pull the trigger to make the kill Shot.
Top Game Features
√ Perfect game control. Easy to make headshots.
√ Complex situation, hijacked buildings, captured arenas and cross firing
√ Critical mission terrories
√ Shooting all the terrorists will lead you to the next stage
√ Different auto loader Guns
√ True to life environment.
√ Amazing 3D Graphics
√ Exciting Map with Realistic Fighting Arena Environment
√ Best Shooting Game
√ Easy & User Friendly Interface
How to Play
√ Touch and Move to aim your enemy in ISIS Alpha Frontier
√ Use your anti-terrorist guns to fire your first gunshot
√ After your first person shooting, your enemy will start firing too
√ Shoot terrorist with fire button
√ Aim the laser dot for a headshot accuracy before your enemy run away
√ Be careful about the close encounters
The sniper 3d shooting games you have to hit flying targets without a miss, then you become a true killer. 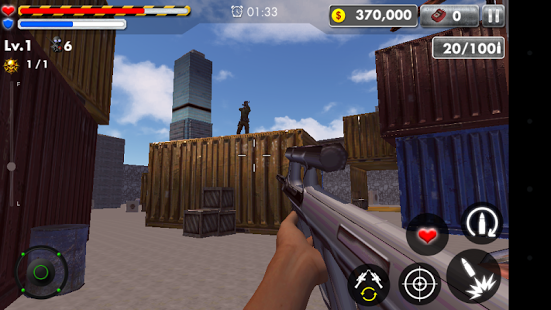